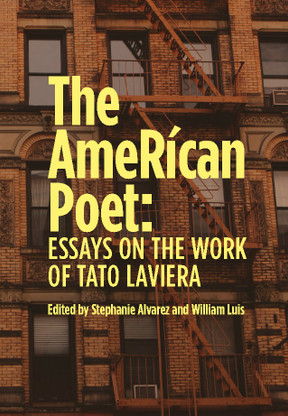 The AmeRícan Poet: Essays on the Work of Tato Laviera (*)

Essays on the Work of Tato Laviera

Theessaysdiscussdiverse aspects of Laviera’s life and substantial body of work that includes five published collections of poetry, twelve written and staged plays, and many years of political, social, literary and healthcare activism. The book also includes four unpublished poems and the play “King of Cans”.

Stephanie Alvarez is Assistant Professor of Spanish and Director of Mexican American Studies and at The University of Texas-Pan American. She is the recipient of the American Association of Hispanics in Higher Education’s Outstanding Latina/o Faculty in Higher Education Award (2011) and The University of Texas Board of Regents' Outstanding Teaching Award (2009). She is co-founder with Tato Laviera and José Martínez of Cosecha Voices: Documenting the Lives of Migrant Farmworker Students. Cosecha Voices aims to empower migrant farmworker students by creating a space in which they develop and perform their own written and digital testimonios. She is the author of several essays on and the confluence of Latin@ identity, language, literature, culture, education and empowerment in various edited books and journals such as Hispania, Journal of Latinos and Education and CENTRO: Journal of the Center for Puerto Rican Studies, among others.

William Luis is the Gertrude Conaway Vanderbilt Professor of Spanish at Vanderbilt University. He is the author of numerous books, including Literary Bondage: Slavery in Cuban Narrative (1991), Dance Between Two Cultures (1997), and Looking Out, Looking In: Anthology of Latino Poetry (2013). Luis is the recipient of a Guggenheim Fellowship in 2012. He is the Director of Vanderbilt’s Latino and Latina Studies Program and Editor of the Afro-Hispanic Review. Born and raised in New York City of a Chinese father and an Afro-Cuban mother, Luis is widely regarded as a leading authority on Latin American, Caribbean, Afro-Hispanic, and Latino U.S. literatures..