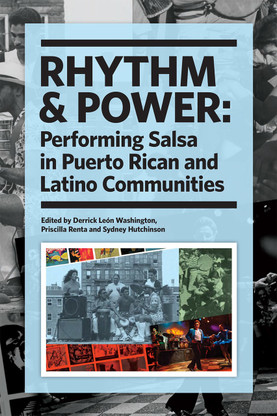 The story of New York salsa is one of cultural fusion, artistry, and skilled marketing. A multi-disciplinary collective of scholars illuminate how immigrant and migrant communities in New York City—most notably from Puerto Rico—nurtured and developed salsa, growing it from a local movement playing out in the city’s streets and clubs into a global phenomenon.

Derrick León Washington is a cultural anthropologist with a focus in curatorial practice and expressive arts of the Americas. He is a former Smithsonian Center of Folklore and Cultural Heritage Fellow and former executive director of El Fogón Center for the Arts in New York City. He is currently an Andrew W. Mellon Curatorial Postdoctoral Fellow at the Museum of the City of New York. There, he conducted curatorial work on Activist New York (2016), New York at its Core (2016), and he is the curator of Rhythm & Power: Salsa in New York (2017) a groundbreaking exhibition and expansive program series on salsa as an artistic social movement