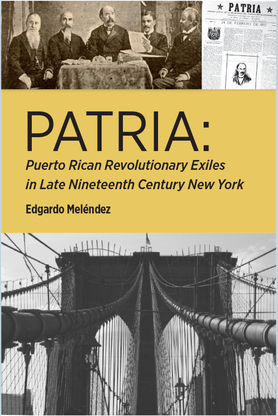 Patria examines the activities and ideals of Puerto Rican revolutionaries exiles in New York City at the end of the nineteenth century. The study is centered in the writings, news reports, and announcements by and about Puerto Ricans in the newspaper “Patria”, of the Cuban Revolutionary Party. The book looks at the political, organizational and ideological ties between Cuban and Puerto Rican revolutionaries in exile, as well as the events surrounding the war of 1898. The analysis also offers a glimpse into the daily life and community of Puerto Rican exiles in late nineteenth century New York City.

He is coeditor with Edwin Meléndez of Colonial Dilemma: Critical Perspectives on Contemporary Puerto Rico (South End Press, 1993); and coeditor with Charles Venator-Santiago of the Special issue of Centro Journal “U.S. Citizenship in Puerto Rico: One Hundred Years After the Jones Act” (Spring 2017). He has also published in several academic journals, including CENTRO Journal, Revista de ftlineCiencias Sociales (Puerto Rico), Homines (Puerto Rico), Revista de Administración Pública (Puerto Rico), and Radical America, among others. He is currently working on issues related to Puerto Rican migration, political incorporation, and citizenship. His forthcoming book is tentatively titled “The Puerto Rican Problem in New York City, 1945-1960: Migration and Incorporation from the Periphery of the American Empire.”