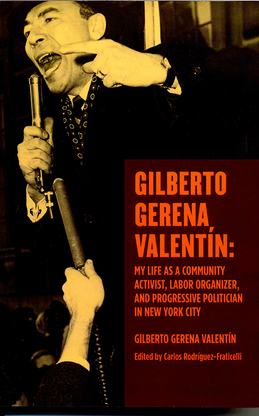 My Life as a Community Activist, Labor Organizer,  and Progressive Politician in NYC

With an Introduction by José E. Cruz

Gilberto Gerena Valentín  was a union organizer, community leader, political activist and general in the war for the civil-rights recognition of his community. In his memoirs, Gilberto Gerena Valentín takes us into the center of the fierce labor, political, civil-rights, social and cultural struggles waged by Puerto Ricans in New York from the 1940s through the 1970s.

Gilberto Gerena Valentín was a central figure in the labor, political, civil-rights and social struggles of Puerto Ricans in the United States. He marched with Martin Luther King in The March on Washington, promoted the boycotting of industries in order to face them to higher minorities, founded the Congreso de Pueblos to unify all Puerto Rican organizations, and was elected to the New York City Council.

Carlos Rodríguez Fraticelli is a professor of social sciences at the University of Puerto Rico, Río Piedras.

Andrew Hurley is Professor Emeritus at the University of Puerto Rico, Río Piedras.

José E. Cruz is an associate professor of political science at the University at Albany, SUNY.